In this section, we provide a roadmap of U.S. Patent No. 5,723,765 with explanatory text of the purpose and goals of each section. The U.S. patent is used as a model because of its well-ordered structure and because its format is similar to patents in other major jurisdictions (e.g., Europe).

This patent has three main sections:

The cover page presents information that is mainly bibliographic in nature. None of this information, including the abstract, has any legal import for interpreting the patent. The data provides notice mainly of historical facts and identifying elements, such as application filing date and serial number.

A bracketed number, which is found adjacent to each data sub-section on the cover page, refers to a specific field that the Patent Office uses for internal identification purposes. For ease of discussion, the same numbers are referred to in this primer.

[19] Type of the publication (e.g., U.S. Patent) and first inventor’s name.
[11] Patent number.
[45] Date the patent is issued
[54] Title of the patent.
[75] Inventors names and place of residence
[73] Assignees (patent owners) and their place of business
[21] Application number, which is assigned by the patent office.
[22] Filing date of the patent application.
[63] Related applications that the patent is claiming priority from.
[51] “International Classification” code, which is also known as the ” International Patent Classification (IPC)”.
[52] U.S. classification codes that the patent relates to and which are assigned by the Patent Office Examiner. The bolded code is considered to be the most relevant classification.
[58] Field of Search contains the U.S. Classification codes that the Examiner searched for prior art.
[56] References made of record in the application process for the patent. Following the references, the names of the Primary Examiner at the Patent Office, the Assistant Examiner (if any), and the Attorney, Agent or Firm of record are listed.
[57] Abstract, which is a short description of the invention.
Finally, at the bottom of the cover page, the number of claims and drawings in the patent are displayed. 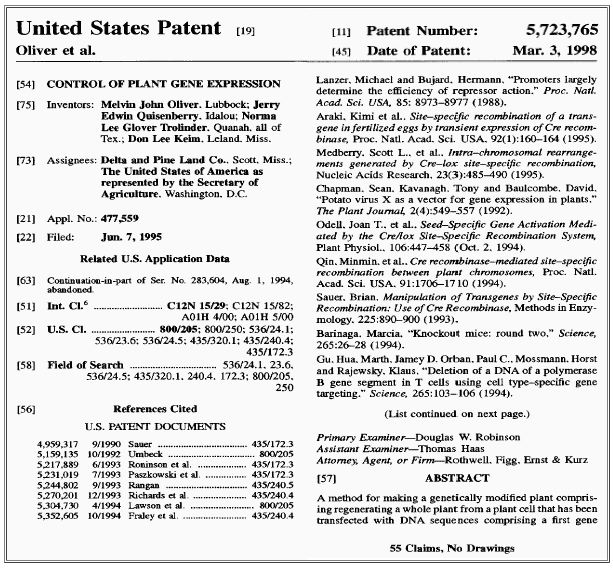 Specification – description of the invention

The specification is also called the disclosure. It contains a description of the invention that must satisfy certain writing requirements.The layout of a specification varies from place to place. It is relatively consistent between the US and Europe, except that (b) and (c) are unique to the U.S.:

The specification has particular value as an aid to interpreting the scope of the claims. Thus, a patent specification is drafted both to satisfy the written requirements for patentability as well as to define claim scope. With this in mind, we will examine each major section of the specification and analyze what purpose is being accomplished. Background of the Invention is typically drafted for a jury audience. Selected art in the field is discussed to emphasize differences with the current invention, and although not well developed in the background of the exemplary patent, to point out the needs for the current invention. Summary of the Invention, which is distinct from the abstract, is meant to discuss the invention (i.e., the claims) rather than the disclosure as a whole. Often, the summary will discuss advantages of the invention or how it solves the problems existing in the art, such as those presented in the Background of the Invention. Detailed Description of the Invention is the meatiest section of a patent. Its purpose is to adequately and accurately describe the invention. There are generally two sections:

Many new readers find the purposes of these two sections confounding and assume that the examples set forth how the invention will be practiced. Rather, examples are meant only to illustrate, but in no way to limit, the claimed invention.

(i) In the first section the invention is described in its broadest sense, to show that the inventors have a broad view of the scope of the elements. Often, preferred embodiments of the invention are described. Such embodiments are generally more limited versions of the broadest concept and are provided for support for a fall-back position of narrower claims if the broader concept is not patentable. Definitions of key terms are often provided and are extremely important in interpreting the scope of the claims.

(ii) A patent application does not require examples, however in practice, examples can often assist in showing patentability (e.g., enablement). The examples may or may not have been performed by the inventors. “Working” exam ples present completed undertakings. “Prophetic” examples are hypothetical undertakings and are always written in the present or future tense. Typically, the examples demonstrate practice of one or more specific embodiments of the invention.

If necessary, a Sequence Listing, including every nucleic acid molecule that is at least 10 nucleotides and every disclosed protein that is at least 4 amino acids, is presented as a third section.

Claims – The most important part of a patent

The claims must “particularly point out and distinctly claim the subject matter which the applicant regards as his invention.” The reasoning is that possible infringers must be able to understand what is and is not protected. There must be at least one claim in a patent. A claim is presented in two parts, the preamble and the body, with a transition word or phrase between them.

The transition words or phrases commonly used are “comprising,” “consisting of” and “consisting essentially of” and have very distinct meanings:

Why have dependent claims?